In 2020, as the world was grappling with lockdown, London-based visual artist Helga Stentzel gained an internet following with her Household Surrealism project. Premised on turning everyday domestic objects into art, her creations reflect her mission to ‘help people to connect with their inner child and rediscover the joy of savouring little visual delights in and outside their homes.’

In Stentzel’s ‘Clothing Line Animals Series,’ four-legged animals – a cow, a horse, a polar bear- take shape from fabrics and clothing hung over a washing line. The wordplay in their titles lends each scene a poignancy that transcends their whimsical appearance; the polar bear, stretched across the line as if it is extending its neck to sniff the wind, is titled ‘Hang on!’, a reference to the species’ climate change-induced precarity.

Stentzel’s search for ‘magic in the mundane’ also takes on greater resonance in light of COVID-induced isolation. In her book The Body in Pain, critical theorist Elaine Scarry argues that every artifact – every creation – is a ‘fragment of world alteration.’ The imagination is there, Scarry contends, to negate absence, including that of our friends. Stentzel takes this to heart, producing a breed of friendly “monsters” – mischievous, googly-eyed creatures that stare back from unlikely places, such as a doorjamb, or the pane of a washing machine. The caption of a Twitter video that shows Stentzel “monsterising” her letterbox slot reads: “I’ll just keep creating imaginary friends until I can hug my real ones again.”

In another notable series, Stentzel creates figures from food. Perusing her Instagram (@helga.stentzel) and Twitter (@helgastentzel) accounts, I stumbled across a choir of singing avocados conducted by a spring onion; a puppy shaped from a loaf of bread, and another from a pile of artfully arranged lettuce leaves. A bunch of grapes made from green gummy bears takes the series into hyperreal territory, and hints at her previous career as an art director in the advertising industry.

While critics rightly argue that social media bears a lot of responsibility for maintaining our subordination to the attention economy, Stentzel’s use of these platforms can be construed as a form of resistance against its attention-sapping effects. Close observation is central to Stentzel’s practice; in an interview with the online journal My Modern Met, she stated that she ‘can spend ages examining a slice of bread in a restaurant.’ While her creations are comforting and joyous, they can also assist us to cultivate a deeper register of attention, which we can draw on to devise interventions of our own. 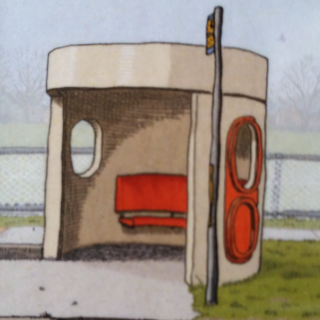